Founded in 1952 by Henri Lederman, Carvil settles in the Rue Royale in Paris and opens its shop on Rue Pierre Charron of the same year, in the heart of the Parisian Golden Triangle. The trendy post-war Paris listens to Boris Vian, Salvador or Danny Boy. And at the cinema, a sacred monster heats up the screen in the Tontons flingueurs : in the dialogue scenes of Michel Audiard, Lino Ventura immortalizes the first Carvil loafer, the Triumph. The New Wave arrives with Jean-Paul Belmondo and Alain Delon meeting in Sois belle et tais-toi.

At the start of the 60s, in loafer full bloom, Delon wows Hollywood in Plein Soleil. The charisma and class of Tom Ripley speeds up the actor’s career. On his feet are the Carvil horsebit loafers, a favourite piece of the actor. In 1966, the playboys of Jacques Dutronc wear Cardin and buy their shoes from Carvil, at the peak of its popularity.

At the same time, Henri Lederman designs the Dylan boot, in tribute to the artist with a zipped and velvet version. Now at ease with the blue jeans, leather jacket and black sunglasses look, the Carvil shoe adds a touch of impertinence to its elegance. Its white patent leather version becomes popular after being worn on stage by Claude François, who was already ordering his own custom-made models set on a 5 cm heel. Joe Dassin and Alain Chamfort walk in his footsteps during their first Olympia. A shoe whose posterity makes its way to the coffin of Mike Brant, wearing a pair of white boots for the occasion.

Elsewhere, the infatuation is the same. In 1968, Charles Bronson is the gentleman with a harmonica in Il était une fois dans l’ouest. The star of the Sergio Leone western goes all over the world in Carvil shoes. Cary Grant also wears his Carvil loafers bought in Paris.

At the start of the 80s, the owner of the maison Carvil changes. Shot by Giacometti and Dumoulin, the poster evoking the features of David Bowie and its China Girl is displayed in Paris. And at Rue Pierre Charon, the myths keep on coming. Coluche wears the custom-made Opera shoes, an evening shoe made from violet velvet, which becomes a collector’s item. Members of the Bouglione family order colourful shoes, while Eddy Barclay exclusively chooses Carvil to dress his guests during his white nights. Even the King of Pop, Michael Jackson appears at the boutique in the 8th district.

Carvil discreetly makes its way through the years 2000, led by Frédérique Picard from then on. The address is quietly spread by word of mouth. Always from father to son. The faithful neodandies introduce the 26909 or the 26907, newer versions of the brogue shoes as well as ankle boots, chic evening shoes and winter or summer slippers. The cinema and musical industry remain faithful to the brand. Ben Harper finds here his bottle green calfskin leather boots, Ariel Wizman and Edouard Baer expand their collections every season and both Stromae and Benjamin Biolay are also wearing the shoes.

The marque’s first models emerged from the workshops of Rossetti and Testoni, suppliers to Carvil during the 50s. The first Carvil store opened at 22 Rue Royale in Paris, and a few months later the premises at 67 Rue de Charron became the house flagship store. Later came Mabillon, the headquarters of the dandy figures of the Saint-Germain district of Paris, then Avenue Paul Doumer in the 16th arrondissement, and then Avenue Victor Hugo.

The 67 Rue Pierre Charron store is the only place that Carvil has taken with it into the 21st Century, and it tells the stories of Jan Deheer, the living memory of the house. In forty years he has seen his favourite ‘Tontons Flingueurs’ – ‘Crooks in Clover’  – with the actor Blier leading the pack trailed closely by playboys and the singer Dutronc, then Heads of State, and also their sons for whom special orders were filled  – as well as exes and new dandies.

The only Carvil store in the world donned a new look in early 2016 that mines its reference domains of music and cinema all over again, sporting a military grey look. The scene was set by the decorator Gilles Viard to whom we also owe the presentation of the Sœur store in Paris, and the new store bears the hallmarks of seventies rock incorporating crocodile skin effects, low black lacquer tables, leopard-look partition screens and blue airport-style armchairs.

To every season there is an artist, and for his first project within the Carvil firmament, the new Artistic Director Frank Charriaut worked with the English gallery owner Jonathan Kugel, who exhibited the sculptural skeletons of James Webster until the end of February. Skulls of walruses, stags and storks made of porcelain struck a pose on pillars of concrete and steel. It was a monumental collection reminiscent of the temple guardians of ancient Egypt and collector’s idols.

Other artistic exhibitions are to follow, along with exhibitions of precious iconic objects and mechanical objects.

In Vigevano, in the workshops dedicated to the bella fatto a mano, the Carvil shoes are still being produced. The delicacy of the Blake stitching paired with the quality of the best Italian and French leathers are the marks of a legacy and traditional craftsmanship remained intact.

For the collection Spring Summer 2016, Carvil remakes the Dylan boots in a very fine leather : Kidskin or Italian velour leather. On the insoles is a stamp marked Carvil Pour Monsieur. This is a more supple line with rock-inspired variations. In 2019, the Dylan boots evolves with two brand new casual models, designed with a tone on tone nylon fabric at the back, or XXL with a rubber sole.

Success and triumph follow the new versions of the loafer.  The slightly more slender shape, the flattering pompoms as well as the colored, camel or white velvets paired with the classic black calfskin leather. The Biarritz version, in kangaroo or peccary, brings a new suppleness. The classic Monceau are a new youth and the patent leather of Victoire have that stylish edge with a touch of impertinence.

Flagship line of Carvil, the slippers add to the elegance of the loafer with the actual comfort of slippers. The Madeleine is dressed in red, burgundy or blue velvet. A freedom of tone as well, embodied with the birth of new derby models with a black double-buckle or a single buckle and velvet blue. 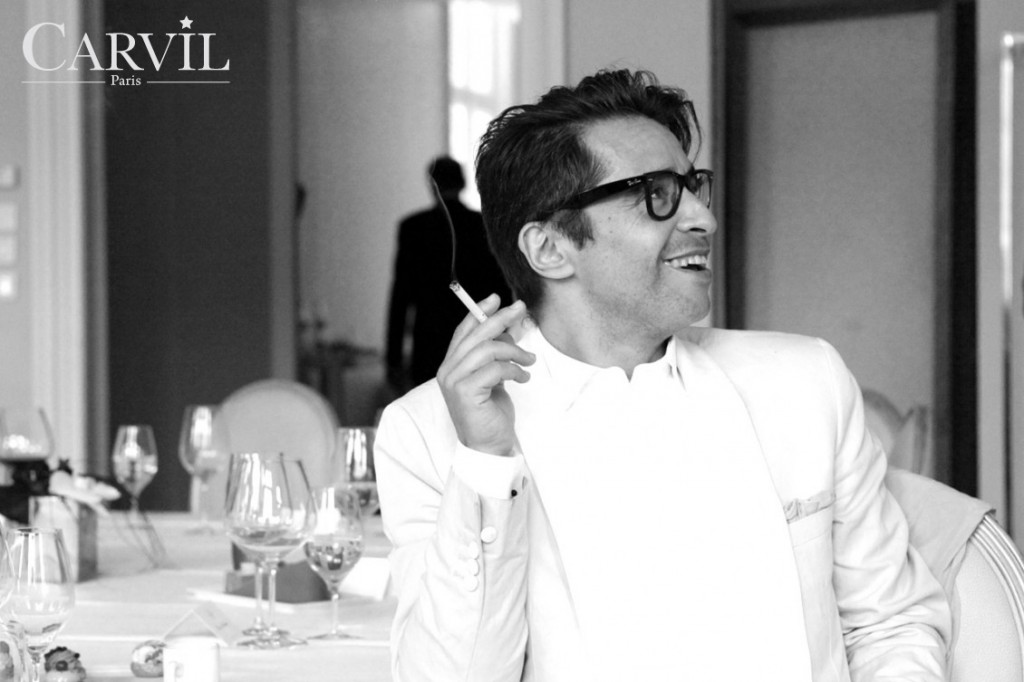 “This was an era in which Lebanese businessmen wearing Smalto encountered the Filipacchi brothers engrossed in the latest edition of Lui magazine, whilst an African Head of State in a safari suit and heelpieces dined on fondue at the ‘Val d’Isère’ restaurant. The area was an inspiration: Belmondo from A Bout de Souffle (Breathless) often wandered these streets, a Gauloise cigarette dangling from his lip meandering along wherever took his fancy.

Carvil spoke to two kinds of people who were already slugging it out within me: the kind of person who liked bright shiny things, and the kind of person who looked for meaning. In those days, I used to love it when someone brought out for me a pair of Derby shoes that were as streamlined as a diplomat’s car. I would stroke the rounded curve of the arch between the heel and the sole and my gaze would linger lovingly before these glossy evening shoes taking in their dimension and their shine, moving onto creamy ankle boots of glove-skin leather, and loafers lounging on bare feet that seemed to have transported Gene Kelly to the edge of the Tuileries district of Paris.

Carvil shoes have been with me at every stage of my life – I should perhaps say ‘our’ lives as I have so many friends that have caught the Carvil bug. There’s the occasion when an elderly uncle gives you a pair, then another time when you make a miraculous discovery during a second-hand sale, then another time when you get behind the shop window. On a day like that, you get yourself more than an item of finery – after all, you’re not just satisfying a whim or slaking a consumerist thirst for something. You’re acquiring an air of nobility for yourself, an air of self-confidence, you’re streamlining. And then you start to look at what you used to call your ‘wardrobe’ with an entirely new eye.

There is so much more of Paris in a Carvil shoe than in any other ‘luxury’ shoe brand. In contrast to the heaviness of the English shoemaker, where somewhere during the 80s the man about town’s foot seems to have got bigger, Carvil has always stood up for its own creation that speaks of a more chippy elegance.

Carvil shoes are for feet that amble around, for feet that balance at the end of a leg propped up on the knee whilst chatting amiably.

They are for feet that walk on the floors of nightclubs, and most importantly for feet that don’t want to do anything too exhausting. Carvil is ‘City’, it is eternal and seems like it is effortless, rather like the London hairdresser who does what he does with a gentleman’s locks without being told what to do.

Carvil is the righteous shoe, the one that does you proud. The customers are discreet, though their names are in lights too. But this is not what matters to me: if Carvil has followed them, and if they have returned the favour, then it simply has to be because those customers wouldn’t desert Carvil for anyone else. One single store was all it took to create a legend with its authenticity, its continuity and its longevity that is the privilege of genuine brands.

I am one of the faithful ones, and maybe this is because I ask more of Carvil than I do of other brands, and because I have always had confidence in the respondent. As I write these words, I am toying with a loafer on the end of my foot. As I break between sentences I cast my eye quickly over to the loafer, and I am reassured that it is worth it. As I finish my piece and as I slide back into the shoes of my dreams I then find myself right here, with my lady, on the pavements of the most beautiful city in the world with no particular place to go, but all ready to go. Carvil for ever.”